Teddie Potter got the bad news in a movie theater. It came in Al Gore’s 2006 documentary, “An Inconvenient Truth.” “I just wept,” she says. “Now I had the science to explain what I was seeing.”

Dr. Potter, a clinical professor of nursing at the University of Minnesota, is an outdoors person, and she had been seeing things that were just not normal. Minnesota’s traditionally frigid winters, for instance: “I remember the ice was different, the snow was different; you had people walking around in shorts.”

She knew she had to do something, and not only for her sake. “I didn’t want my grandchildren to say, ‘You knew about this and you did nothing,’” she says. “I vowed to dedicate the rest of my work to slow this down, to turn this around.”

Dr. Potter started working hard to build the knowledge and support needed to counter conditions that create the climate crisis.

At her church, for instance, she and other parishioners persuaded the congregation in 2007 and 2008 to invest in 240 solar panels. As a nursing professional, she could see the potential in working with others for a wider – even a worldwide – effect. At the University of Minnesota, this approach got climate embedded in the health care curriculum; in the UM School of Nursing, she is listed as a climate champion. She also works with a Minnesota group, Health Professionals for a Healthy Climate, to be a voice for health in climate advocacy in state policy.

And Dr. Potter is active in the planetary health movement, which spans the gamut of environmental effects on health, including soil and air pollution, biodiversity loss – and, of course, climate change. 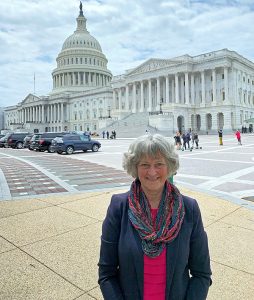 “Our planet is in multisystem failure,” she says. “But we are remarkable in preserving life. It is not a hospice situation.”

In 2009, Dr. Potter was named the first director of planetary health in the UM School of Nursing. People have a special trust in nurses, she says. And she sees a big role for nurses in planetary health. She’s working with Project Drawdown, a research group that identifies and shares the most viable climate solutions, to guide nurses in four key areas: Food, Mobility, Gender Equity, and Natural Climate Solutions. The job is not simply for nurses, she points out. “Every single person has a role,” she says. “That’s where we are with the planet now.”