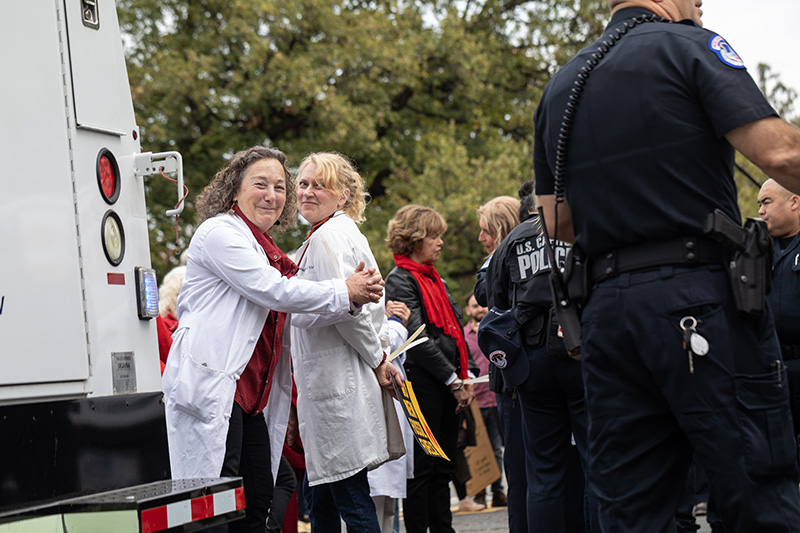 Charlotte Brody (left) and Katie Huffling (right) participating in an act of civil disobedience in support of climate action as part of the Fire Drill Fridays protests.

The executive director of Alliance of Nurses for Healthy Environments, or ANHE (informal slogan: The nurses are here!), testifies before officials in rule makings, notably with the U.S. Environmental Protection Agency.

“They really listen to what you are saying,” Huffling says. “It’s amazing. It’s such a fine example of democracy.”

During rulemaking, officials must weigh each submitted comment on its merits. This creates an equalizing effect; it means Huffling’s arguments have to get the same consideration as, say, Exxon’s. If an argument looks valid, officials need to respond to it in their comments. If they find the argument sufficiently valid, they can change the proposed rule.

“I encourage nurses – if they are wanting to dip their toes into advocacy – providing testimony at a hearing is a really great way to do that,” Huffling says.

“What’s more, even if the final rule doesn’t give you what you want, your words in the testimony can still help to create the change you support,” Huffling says.“Let’s say the rule winds up in court – not uncommon. Because your argument became part of the public record when it was accepted, lawyers can retrieve it, assert that you were right all along, and use your comment to buttress their case.”

As a nurse-midwife before she became more deeply involved in ANHE, Huffling says nurses can talk about the science in the straightforward language they use to communicate with patients.

And Huffling says nurses can carry real life into the often-passionless conference room. “When we have nurses give testimony, what’s really powerful is that they are able to provide a personal context, whether it is a personal experience or something that they’ve seen in their patients,” she says. Huffling can talk about patients she saw who had conditions such as asthma, which are worsened by climate change.

For nurses who want to become more involved in climate advocacy, ANHE has training and resources. For backgrounding, there’s the e-textbook Environmental Health in Nursing.  To guide their steps and provide support, work groups help members connect and collaborate.

“Nurses can accomplish a lot in advocacy because they have people’s trust, know the science, and can say it clearly,” Huffling says. “I’ve been in hundreds of visits with legislators,” she says. “It’s such a powerful combination.”