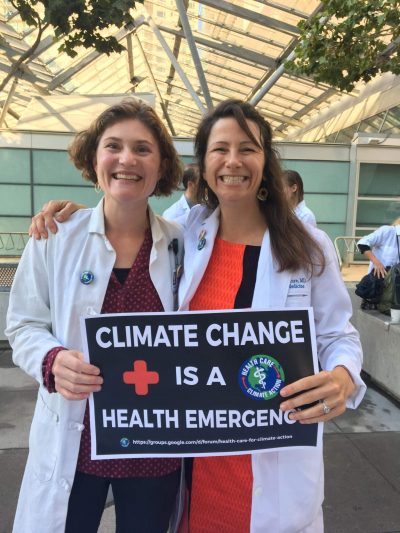 The climate crisis came after Amanda Millstein like a wildfire. In October 2017, Dr. Millstein’s parents had evacuated their home in California’s Napa Valley, about 40 miles from her Bay Area home, almost literally a step ahead of Northern California firestorms. At four o’clock in the morning, they were at her door in need of a place to stay.

“This was the first time I was forced to come face to face with what climate change means – for me, personally,” Dr. Millstein says. “There was a fire within about a mile and a half of their house.”

That day created what the primary care pediatrician in Richmond, California, calls her “climate awakening.”

Dr. Millstein realizes she has been fortunate in that her family – including her parents – have been spared the horrific devastation and even loss of life that the fires have left. But the catastrophes created a deep sense of anxiety that her go-to exercise and meditation could not quell.

After about two years, the doctor felt she needed to find a doctor. That’s when she met internist Ashley McClure. “We had this moment together where I said, ‘This is how I’m feeling,’ and she said, “I am, too,’” Dr. Millstein says.

Dr. McClure asked Dr. Millstein to help her organize a physician day of advocacy in the Bay Area, timing it with the international climate strikes of September 2019. After considering it for a week or so, Dr. Millstein agreed. She also decided that she needed to tell the news media about the advocacy – and she then discovered the public forum authority that doctors can have.

In addition to meetings with staffers in the offices of then-House Minority Leader Nancy Pelosi and Senator Dianne Feinstein, the two doctors got media attention for the advocacy effort, including in The San Francisco Chronicle.

The success Dr. Millstein felt was liberating, and it continues with the advocacy organization that she and Dr. McClure founded for California medical and health professionals, and students, Climate Health Now.

Dr. Millstein knows the climate crisis poses a danger of long-term catastrophe. But she says the health benefits of combatting the crisis can come fast, in things like reduced asthma and heart disease. “This is going to help us right now,” she says “People are going to be healthier. That’s the exciting part.”