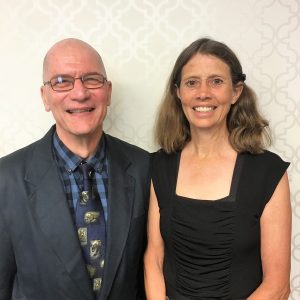 What you don’t know can hurt you, so Drs. Lori and Rob Byron have been hitting the road to tell people how climate change can damage their health. The Hardin, Montana, couple – she’s a pediatrician and he’s an internist – have gone by car and by bicycle, using slide shows and puppet shows, to spread the word among members of the public and the medical profession.

Separately or together, the Byrons have been visiting college campuses, tribal reservations, civic groups and medical societies, as well as talking with people they meet while traveling, mostly in Montana but ranging from St. Louis, Missouri, to the Arctic Circle in Canada. The Byrons long had been aware of the harm climate change has done and the greater harm it could yet do, so they decided they had a duty to take more action.

“We really felt like we needed to advocate,” Lori Byron says.

“This is a train that is coming,” Rob Byron adds. “We needed to step up in a big way.”

Usually, the Byrons are in Montana, doing presentations. Even among doctors, who generally understand that climate change entails health risks, the extent often comes as a shock, Lori Byron says: “The major response is, ‘I had no clue about the immensity.’”

The Byrons also have traveled far from Montana.

In July and August of 2016, Lori Byron had a bike trip of about 2,00 miles, from Prince Rupert, British Columbia, to the small town of Inuvik in Canada’s Northwest Territories, about 125 miles inside the Arctic Circle. Her ride was to raise money for Citizens Climate Education, a nonpartisan nonprofit that focuses on providing information about climate solutions. She naturally talked with residents along the way. And she heard them talk about things that worried them, such as sagging foundations because their homes are built on permafrost that melts under Arctic warming.

About the time that Lori Byron was headed north, Rob was in a small group heading south by car and bike on a journey of more than 500 miles from Minneapolis to the St. Louis area. His trip was part of Climate911, a national network of health professionals who act to support a healthy climate policy.

One of Climate911’s outreaches is the Dogs to the Rescue puppet show, made for local stops in communities. “The primary message was that there are lots of solutions that not only benefit our health directly, but also could help slow climate change,” Rob Byron says.

The Byrons know there is more to be done, but they take one step at a time. The crucial thing, they say, is to emphasize solutions, such as clean energy and agriculture practices that put more carbon back into the soil. “We always end with Hope,” Lori Byron says.