Report on the COP26 climate conference from Dr. Edward Maibach

Dr. Ed Maibach attended COP26 and is the Executive Director of the Center for Climate Change Communication, the parent organization of the Consortium.

During the run-up to COP26, GCHA, the World Health Organization, the Consortium and other health groups developed the Healthy Climate Prescription—an urgent call to heads of state and their COP26 delegations for climate action from the world’s health community—which was endorsed by more than 600 health organizations that represent over 46 million health professionals worldwide. The call to action stated “We call on the leaders of every country and their representatives at COP26 to avert the impending health catastrophe by limiting global warming to 1.5°C, and to make human health and equity central to all climate change mitigation and adaptation actions,” and made a half dozen specific recommendations necessary to help achieve this goal. This call to action received a lot of attention at COP26, and as reported by the New York Times, helped reframe climate change as a health crisis.

In a post-COP26 briefing to the Consortium’s Steering Committee, Ed Maibach summarized by saying the meeting produced “important gains, but not enough.” The gains include pledges to:

If all of these new and existing pledges and targets are implemented on schedule—which is not a sure thing—the planet will likely warm 2.1°C by the year 2100, a far cry from the 1.5°C that the Intergovernmental Panel on Climate Change has suggested as necessary to protect human health and wellbeing.

The Medical Society Consortium plans to be back at COP27 in Egypt to continue advocating for the recommendations made in the Healthy Climate Prescription—because the job is not done until global warming has been limited to 1.5°C. The voices of physicians and other health professionals have a unique and necessary role to play in ensuring this outcome. 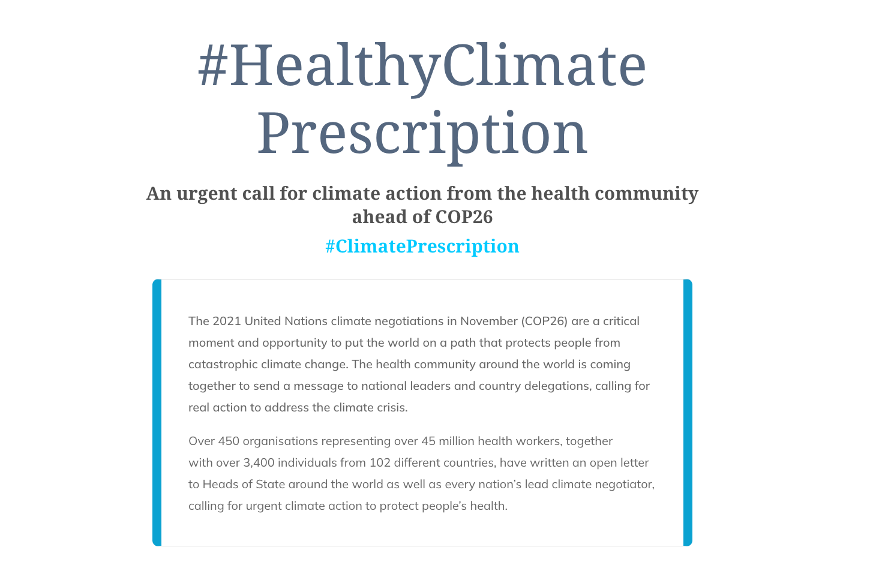