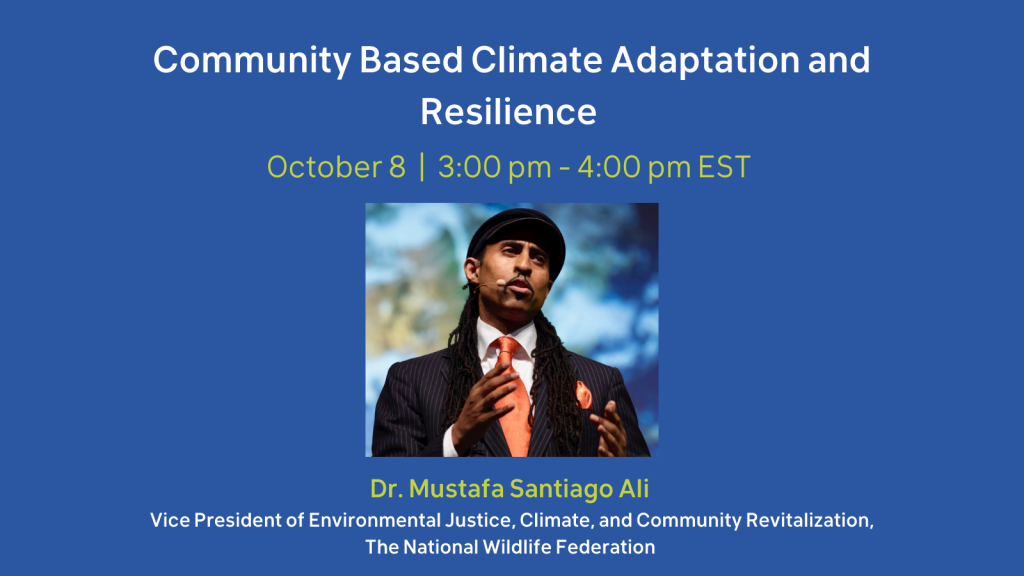 Adapting to climate change is not a question for the distant future. Communities are facing the impacts of a changing climate today. Growing floodplains, wildfire seasons, extreme weather, and unfamiliar vector-borne diseases are just a handful of impacts that require concrete changes in the ways governments, institutions, and communities operate. The United States does not have a comprehensive National Adaptation Plan and only about half of all U.S. states have finalized an adaptation plan, in addition to a handful of cities and municipalities. While we have a long way to go in getting prepared, we also have the opportunity to make these plans the right way.

What does equitable, community-focused adaptation planning look like? How can health professionals support these processes?

Dr. Mustafa Santiago Ali will join us to explore these questions and the importance of hyper-local adaptation planning for vulnerable communities. Dr. Mustafa Santiago Ali worked for 24 years at the U.S. Environmental Protection Agency (EPA) and was a founding member of the EPA’s Office of Environmental Justice (OEJ) before moving on to work for Hip-Hop Caucus. He currently serves as Vice President of Environmental Justice, Climate, and Community Revitalization at the National Wildlife Federation.

Before joining the National Wildlife Federation, Mustafa was the senior vice president for the Hip Hop Caucus, a national non-profit and non-partisan organization that connects the hip-hop community to the civic process to build power and create positive change. In his role, he led the strategic direction, expansion, and operation of the Hip Hop Caucus’ portfolio on climate, environmental justice, and community revitalization.

Mustafa uses a holistic approach to revitalizing vulnerable communities and has worked with more than 500 domestic and international communities to secure environmental, health, and economic justice. Throughout his career, Mustafa has conducted more than 1,000 presentations across the country, including speeches, training, and guest lectures at over 100 colleges and universities. He is a former instructor at West Virginia University and Stanford University.

Mustafa currently serves as a board member for Robert Wood Johnson Foundation, Union of Concerned Scientists, Rodenberry Foundation, TREE, and Climate Hawks Vote. He is frequently seen on television, including appearances on MSNBC, CNN, VICE, BET, Full Frontal with Samantha Bee, and Democracy NOW! Mustafa is also a regular guest on WURD radio, Roland Martin Unfiltered, The Dean Obeidallah Show, and many others, and is the former co-host of the live radio show and podcast Think 100%: The Coolest Show on Climate Change with Grammy-nominated singer and actress Antonique Smith and civil rights icon Rev Lennox Yearwood.