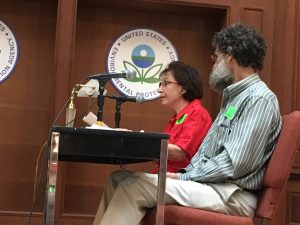 Respected EPA panelists and fellow citizens. My name is Mona Sarfaty. I am a physician trained in family medicine and public health; I practiced primary care medicine and taught medical and public health students in three different academic medical centers over a 35-year period. Today, I direct a program in Climate and Health at George Mason University in Fairfax, Virginia. I also direct a Consortium of physician societies called the Medical Society Consortium for Climate and Health whose 550,000 members are more than half the doctors in the U.S.  The Consortium seeks to inform the public and policymakers about the health harms of climate change and the health benefits of climate solutions. We have released a statement along with nearly 70 medical groups.

The Environmental Protection Agency (EPA) is proposing to change the rules that dictate what evidence must be considered as the basis for protecting the public’s health. As a physician who spent a summer in Southern California during college and didn’t see Mount Wilson looming in front of me for the entire first week I spent there because of the smog, I am incredulous. I remember well the pain in my chest when attempting to play tennis on those smoggy days.

This was the early 70’s at a time when a Republican president was creating the EPA. Now, 50 years hence, tremendous evidence has accumulated that validates my symptoms and the negative effect that unhealthy air has on people who must breathe it. After that summer, as a practicing physician, I took care of people with asthma and chronic lung disease who were at greater risk on bad air days. So it is shocking to me that the EPA would propose putting aside huge amounts of thoroughly reviewed evidence on the causal connections between air pollution and poor health claiming that the basis for the conclusions was “secret”.

Today, I lead a Consortium comprised of the country’s largest medical societies whose doctor members are highly concerned about the health harms of climate change. The similarities between the current EPA willingness to disregard established science about the connection between carbon dioxide and global warming and the willingness to disregard solid evidence about the impact of air pollution on health are glaring. Despite overlapping evidence from every country in the world and the entire U.S. climate-science enterprise, the EPA leadership does not accept or recognize reality.

To all of us whose lives are dedicated to helping people get and stay healthy, there is a “secret” lurking in the science of air pollution and global warming. It is not what we have long known about how burning fossil fuels creates waste products that damage and inflame our lungs. This has been validated by voluminous overlapping research studies. The secret is not that carbon emissions from burning fossil fuels are warming our climate, exacerbating the health harms of air pollution, and causing other dangers to our health–from heatwaves, wildfires, pollen production, and storms. The secret is hiding in plain sight: fighting air pollution is the greatest public health opportunity of our time. Reducing polluting fumes and emissions from fossil fuels will rapidly improve our health and fight climate change.

When an EPA’s not-so-secret agenda is to promote fossil fuels, two things follow: 1) the fact that fossil fuels are the major contributor to both air pollution and global warming must be undermined or denied; and, 2) the research that documents this reality and how it harms our health must be attacked. It’s not hard to see that the approach is to mislead people by wrapping these attacks in rhetoric that is alternatively scary (“secret science”) and high-minded (“transparency”). We are told that the rationale for the new proposed “strengthening transparency standard” is that individual medical records included in the research were “secret.” In fact, like all medical records, they were confidential; and they remain so.

The record shows that this same argument of “secrecy” against scientific studies has been used by polluting industries going back many years. Currently, we have a President who thinks only of less regulation. A President and an EPA that fail to regulate responsibly and ignore key research studies put our health and our climate in danger.

Health providers know that facts may be scary when our health is threatened. But we also know that denying or ignoring facts blinds us to discovering and acting on the best ways to heal medical problems and protect our health. We can’t let that happen. The EPA must live up to its charge and work to face facts and protect our environment and our health. With this proposed regulation, its leadership is pointing it in the opposite direction.