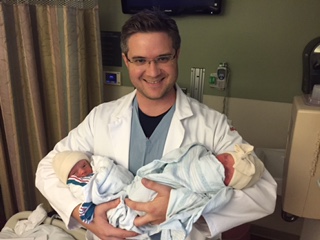 Pollutants that feed climate change can cause health damage in people at any stage of life – even before a baby is conceived – and, like many other doctors, Nathaniel DeNicola has to deal with those problems in his practice.

That’s why DeNicola says physicians in his specialty, obstetrics, and gynecology, are joining with physicians in other fields in the Medical Society Consortium on Climate and Health to alert the medical community and patients about the wide-ranging health effects of global warming.

As an active member of the American College of Obstetricians and Gynecologists (ACOG), DeNicola spreads the word about what ACOG knows and does concerning climate change. ACOG considers climate change an urgent issue for women and health, beginning early. “The impact of environmental toxins in the preconception and prenatal period can have a profound and lasting impact on obstetrical outcomes, and these can have negative consequences that last through a lifetime,” an ACOG policy statement says.

Preventing or reducing the dangers involves trying to get ahead of the problem. “A lot begins in preconception care,” says DeNicola, who practices in Washington, D.C.  There are indications that air pollutants such as carbon-laden diesel exhaust could be linked to increased risks of genetic damage.

Many parents, as well as patients planning to be parents, know this. “I have patients ask me where they should buy their homes,” DeNicola says. Research indicates living in areas with heavy traffic raises the risk of preterm births, he says.

Just like pregnancy continues past the obstetrical stage, effects on patients continue into areas covered by other medical practices, so DeNicola acts as an ACOG liaison with other medical groups. He notes that the American Academy of Pediatrics has been active in education about the effects of environment on children. “We’ve been forming a very valuable relationship,” he says.

DeNicola calls on other doctors to inform each other and counsel patients. “Every doctor could have something to talk with their patients about,” he says.