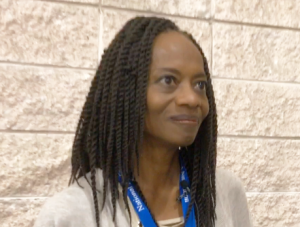 You don’t need a catastrophe to know the effects of climate change on health; climate change’s causes alone are enough.  Dr. Cheryl Holder has seen this in her patients and in her family. Holder, an internal medicine specialist on the faculty of Florida International University Herbert Wertheim College of Medicine in Miami, works in family practice with a patient population largely of poor people of color. She spoke about her experiences and how they tie into climate change at a recent National Medical Association conference. Holder recalled at the conference the experience of one of her regular patients, an older African-American woman who had been compliant in managing asthma. When the woman visited for an early renewal of her albuterol inhalers, Holder looked for the rest of the story. It turned out that the woman, who lived in a poor and high-crime area, had run short of money to pay her electric bill, which powered her air conditioner. Despite a bout of stifling heat and humidity, she feared to open her windows. The result: she had used her albuterol more. Heat and humidity are far from unusual in South Florida, but climate change makes those conditions more common and more broadly prevalent. Dr. Holder wants experiences like her patient’s to be a first ring of the alarm. “Most doctors have heard about climate change,” Dr. Holder says. “Most doctors are sort of aware about the impact this is having.” Dr. Holder’s next turning point was the report of a case in Los Angeles involving a 25-year-old African-American man – her son, who had been managing asthma. He told his mom that he needed albuterol more since he had moved to an apartment in LA – and that, after he found a new apartment, his symptoms eased. The difference: the first was closer to a freeway and vehicle exhaust; the second was farther from a freeway and near a park. What links these cases is the prime cause of climate change – carbon pollution, which creates asthma exacerbations directly and creates them indirectly through increased heat and humidity. Dr. Holder says treating patients is not enough; the solution has to attack the primary cause. She advises doctors to look for things they can do in their community. “The world is my community,” Dr. Holder says. “We have to change it, and collectively, we can do this.”