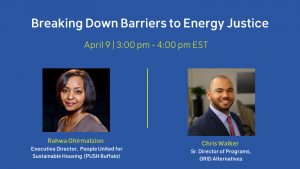 How can we ensure the communities that have been most impacted by fossil fuel production have access to cost-saving, air-clearing renewable energy and energy efficiency technologies?

Join the Consortium and two leading experts for a webinar on access to renewable energy and energy efficiency for frontline and environmental justice communities.

Rahwa Ghirmatzion is the Executive Director of People United for Sustainable Housing (PUSH Buffalo), a community organization that works at the grassroots to create and implement a comprehensive revitalization plan for Buffalo’s West Side. Rahwa will speak to the health effects of substandard housing and how PUSH has created access to affordable housing rehabilitation, weatherization, and green infrastructure.

Chris Walker of GRID Alternatives will elaborate on the barriers to renewable energy faced by low-wealth communities. GRID Alternatives supports economic and environmental justice communities nationwide to get clean, affordable renewable energy, transportation, and jobs. Chris leads the Solar on Multifamily Affordable Housing (SOMAH) program, a historic effort to expand solar access and its benefits to renters by installing 300 MW of solar on multifamily affordable housing by 2030.

Health professionals have a key role to play in testifying on the health impacts of fossil fuels and substandard housing and advocating for policies that improve the health and well-being of frontline communities. Register here and please share widely!

PUSH Buffalo is a community organization that works at the grassroots to create and implement a comprehensive revitalization plan for Buffalo’s West Side, with more than $40 million invested in affordable housing rehabilitation, weatherization and green infrastructure. Under Rahwa’s leadership, PUSH is at the forefront of the movement for a Just Transition from actual design and deployment of solutions to the creation of good green jobs and the advocacy of groundbreaking state policy.

For more than 20 years, Ghirmatzion has worked with community-based organizations in western New York that promote socially just community development. She was executive director of Ujima Company, Inc., a multiethnic professional theater company whose primary purpose is the preservation, perpetuation and performance of African American theatre. She is also a community health worker and past trainer for the Community Health Worker Network of Buffalo and a founding board member of the Partnership for the Public Good (PPG), a local think and do tank.

Rahwa was born in Asmera, Eritrea in the middle of a civil war and came to Western NY as a refugee at the age of eight with her family, after living in Sudan. She is a life-long artist and activist.

Chris is GRID Alternatives’ Senior Director of Programs and co-leads GRID’s Program Administration Department. He also leads the Solar on Multifamily Affordable Housing (SOMAH) program, a historic effort to expand solar access and its benefits to renters by installing 300 MW of solar on multifamily affordable housing by 2030. SOMAH is funded by California’s cap-and-trade program at up to $100 million per year, and is overseen by the California Public Utilities Commission.

Prior to coming to GRID, Chris helped lead U.S. Department of Energy-funded programs at The Solar Foundation, including the Solar Training Network, a nationwide solar workforce development program, as well as SolSmart, a program that empowers local governments to address soft cost barriers to solar deployment through technical assistance and designation. Chris has also worked at SolarCity (a national solar integrator later acquired by Tesla) and the Climate Institute, a DC-based think tank.

Chris has also volunteered extensively with the NAACP’s Environmental and Climate Justice Program and holds B.A. and M.A. degrees from the University of Florida in Political Science, with concentrations in global political economy and sustainable development.